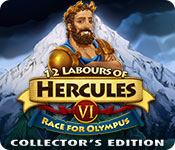 The unknown villain abducted Zeus who had been ruling Olympus for centuries. Help Hercules and find the true leader.Help Hercules find the true leader to rule Olympus.Panic ensues throughout Olympus once news of Zeus' abduction breaks. Hercules and Megara embark on a mission to locate their missing ruler. Join them on an adventure that spans from snowy peaks to active volcanoes. Find the villain that kidnapped Zeus and restore order to the kingdom of Olympus!